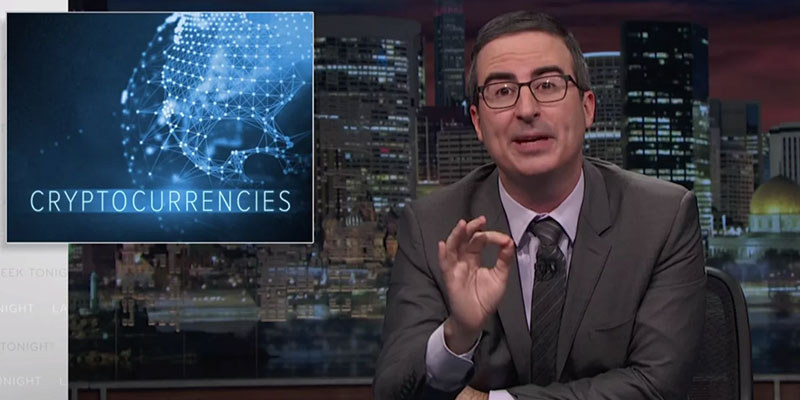 If you have not seen it yet, John Oliver gave his audience a detailed introduction of cryptocurrencies in this week’s episode of Last Week Tonight. Well, it was not going to be long before the cryptocurrency buzz caught onto such platforms – in fact, a number of celebrities and television show hosts have talked about it in the recent past. Therefore, it is no longer a matter of crypto discussions crossing over to some of these platforms and people should be more interested in what is being said about crypto.

There are literally hundreds if cryptocurrencies in virtual circulation around the world at the moment – more than 1,500 to be precise. You will be forgiven for not knowing that since all of them seem to have been overshadowed by Bitcoin, which for very many reasons is regarded to be the mother of cryptocurrencies. During the episode of the Shows that aired on Sunday, John Oliver explains the people have been trying to get into the bitcoin and crypto fervour without knowledge of what exactly they are getting themselves into or the risks that are involved. He elaborated this by describing cryptocurrencies as “everything you do not understand about money combined with everything you do not understand about computers.”

John Oliver covered the hugely publicized rise of bitcoin while in comparison to the public perception of the decentralized digital currency just over a year ago. “Just a few years ago you’d only hear about bitcoin from that one guy in your office who wouldn’t shut up about it,” he said.

He went further on to point out the hiccups that bitcoin has been subjected to in the past, one of which was a bitcoin conference that stopped taking bitcoin. Obviously, a red flag that he likened to an instance where he allegedly tried to “pay for access to the Republican National Convention using Ronald Reagan’s dusty skeleton bones.”

While the show, that also features a guest appearance from Keegan Michael-Key, seems to be more of a sceptical piece that is geared towards paralleling the enthusiasm of bitcoin ambassadors, there is one clear message – when it comes to cryptocurrencies in the present, only invest what you can afford to lose. There is, of course, a lot more to learn from that episode of the show. Follow this link to see for yourself.